Are Daddy Longlegs Really the Most Poisonous Spiders 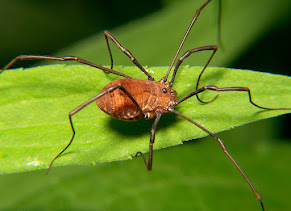 A widespread myth holds that daddy longlegs, also known as granddaddy longlegs or harvestmen, are the most venomous spiders in the world. We're only safe from their bite, we are told, because their fangs are too small and weak to break through human skin. It turns out that the notion is false on both counts. But a little clarification is needed.


According to entomologists at the University of California, Riverside, the term "daddy longlegs" is commonly used to refer to two distinct types of creatures: opilionids arachnids with pill-shape bodies and eight long legs that are actually not spiders, and pholcids, which have long legs and small bodies, and thus resemble opilionids, but which are true spiders.
Opilionids

QUODDY COUGARS ARE NO MYTH

Image via WikipediaThis interesting thread is taken from NBNature's digest:

Subject: Re: Mountain Lion in Connecticut

The cats reported by Steven have been seen by other area residents. One of our closest neighbors reported seeing a long tailed cat cross highway #1 in one or two bounds, a friend observed one near Saint Andrews and people within one kilometer of my home reported seeing Cougar in a field behind their house. I cannot claim to have seen any evidence of these cats. However, it seems likely that one or
Read more »
Posted by Archive Manager at 11:30 AM 0 comments

Email ThisBlogThis!Share to TwitterShare to FacebookShare to Pinterest
Labels: COUGAR

FISHERIES: Just how much have things changed you ask! |

Some of us remember the Quoddy Region as a bustling centre of activity fed by the abundant fisheries of the area. In only a few decades this has changed dramatically as shown by this report from Fishing Grounds of the Gulf of Maine by Walter H. Rich which first appeared in the U.S. Department of Commerce, Bureau of Fisheries, Report of the United States Commissioner of Fisheries, for the fiscal year 1929
**************************
The Wolves. These make a group of small islands lying N. ½ E. from Grand Manan, distant 8 or 10
Read more »
Posted by Archive Manager at 10:38 AM 0 comments

When Quoddy was REALLY wild ... with wolves!

When the airline from Calais to Bangor 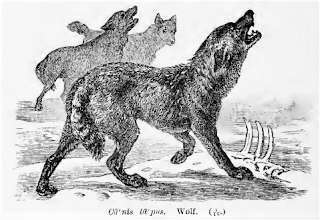 " When the "Airline Stage Company" finally opened a track from Bangor to Calais in the mid 1800's they were awarded the contract for mail delivery to Calais, a contract long held by the Shore Line stage company which came up the coast. This was a serious financial blow to the Shore Line because most passengers took the mail stage and switched to the Airline Route which was also 6 hours shorter. The Shore Line folks took the offensive with the attached ad which was printed in newspapers and posted in public places. They spread false stories of the "Airline" coach being regularily preyed upon by vicious packs of wolves. It didn't work as the Airline stage ran for many years over our beloved Airline even though the road became known as the "Wolf Route". - Al Churchill"

Posted by Archive Manager at 8:37 AM 0 comments 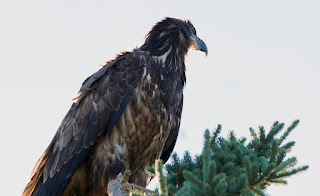 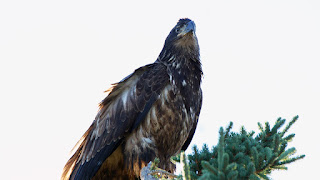 was intent on watching other eagles fishing and did not pay much attention to me.  It was dawn and the sun was touching the feathers.  Joyce
Posted by Archive Manager at 11:01 AM 0 comments

TO DO: Guaranteed Shark and Whale sighting at Huntsman's Discovery Aquarium!

Posted by Archive Manager at 8:02 AM 0 comments

EXPLORE: The Strange Rocks of Campobello Island, Bay of Fundy

Some of Campobello‘s young people like to call the ledge off the island’s Liberty Point “Frog Rock.” Some also see the image of a turtle.

With a little imagination, the image of the stone stack below Campobello’s Friar’s Head reveals an “Old Friar.” A Passamaquoddy legend speaks of the stack as a young Indian maiden, turned to stone while awaiting the return of her lover. The cracks in the “Old Friar” indicate he is likely to loose his head in the not too distant future.

WHALES: WOW! Imagine this coming up alongside your Kayak 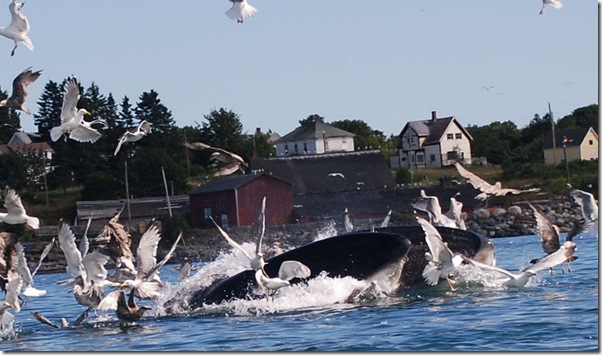 . Is this two whales or one (take a close look)? What kind do you think?
Sent by Bobby Hooper who has this to add.

Got it from one of the seasonal residents who was out kayaking and was in the middle of a flock of gulls that was diving for food when.......up came the whale. No conditions are attached to the picture so put it up if you like. Her name is Linda Hallas from Florida.Originally posted in August, 2010

CREATURES: The Hummers and the Hornet.

Hummingbird_Aerial Acrobatics (Photo credit: stanlupo)
We have a couple of great hummingbird youngsters enjoying our backyard and giving no end of entertainment with their spectacular aerial “dogfights”. We usually keep two or three feeders and Marg’s spectacular kitchen garden has a constantly changing kaleidoscope of flowers to attract them as well.+
One of the feeders is at the window outside my little computer room, so I am constantly entertained by their antics and the occasional visit from one of our squirrels or chipmunks. But over the last week there has been something totally different. Apparently a hornet (A yellow-jacket actually.) decided the feeder was his and has been defending it whenever a hummer shows up. The hummers are respectful of their neighbour and they will flit about looking before they try to feed. Sure enough, the hornet will zip in from somewhere close and engage the hummer. Usually the hornet will win after a brief battle between the two.+
I’ve never seen this before. But, apparently, others have becase a brief internet search brought up some interesting photos, including the one with the little tale.+
Have you seen hummers dueling with insects at your feeder?
Posted by Archive Manager at 9:57 PM 0 comments

Company is back! Crows, Hares, Hummers, Warblers and more

It must be spring. Working on our lot and gardens but I don't know ... now we have 3 rabbits (varying hares doncha know) that have adopted us and feed in the path of our garden showing no fear of us at all. Same with the 2 crows who adopted us a few years ago and now realize we are back in Bocabec. And the hummingbird(s) and others are back as well. Summer is here ... yeahhhh! 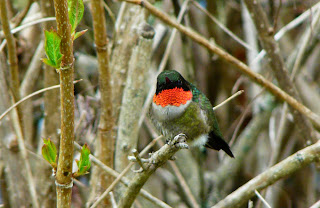 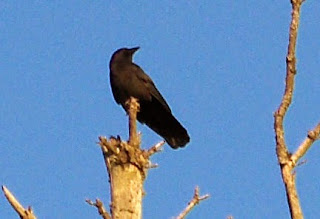 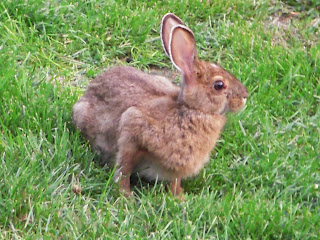 Posted by Archive Manager at 9:04 AM 0 comments

http://casa-del-campo.smugmug.com/Birds/Eagles-2014/i-9vFFZGR/A
Yesterday ( November 29) was a lovely, calm day and I took the blind out to the porch early to see if the eagles would come and sit on the sugar maple and they did! The first to come was the male who sat behind a tangle of limbs that was impossible for the camera to get through. But soon along came the female and sat in a very good spot. The photos start at the blue one with the flying eagle and go to the end.  I enjoyed this day very much.  Joyce

Posted by Archive Manager at 6:19 AM 0 comments

The authors of the following article are pleased to announce a new paper
providing evidence that speed restrictions implemented in 2008 to reduce
vessel related deaths of North Atlantic right whales along the East
Coast of the United States have been effective.

ABSTRACT: To reduce right whale /Eubalaena glacialis/ deaths caused by
ship collisions along the US East Coast, a rule was implemented on 8 December 2008 requiring all
vessels ≥65 feet (19.8 m) to travel 10 knots (18.5 km h−1) or less in 10 seasonal management areas
(SMAs). To evaluate the effectiveness of this rule, we plotted the locations of all right whale
and humpback whale /Megaptera novaeangliae/ carcasses attributed to ship-strikes since
December 1990 in US waters to determine their proximity to SMAs. In the 18 yr pre-rule period, 13 of
15 (87%) right whales and 12 of 26 (46%) humpback whales killed by ships were found inside later
SMA boundaries or within 45 nmi (83 km) of their perimeters during later active dates. In
the first 5 yr after the rule became effective, no ship-struck right whales were found inside or
within 45 nmi of any active

SMA. This was nearly twice as long as the longest pre-rule period
without discovery of a ship-struck carcass in those areas during effective time periods. Based on the 18 yr
pre-rule period, bootstrap resampling analyses revealed that the probability of finding no
ship-struck whales in or near SMAs during the first 5 yr post-rule period would be a statistically
significant reduction in such deaths (p = 0.031). The results suggest the rule has been effective at
reducing right whale deaths.

We suggest enlarging SMAs to include additional parts of the right whale
migratory corridor.

About the Snowy Owl Invasion

Some interesting information about the snowy owl invasion along the east
coast. From Nature NB. One at Bocabec River this past weekend.

Just saw the SNOWY OWL (Harfand des neiges) coming back from Fredericton
on the new highway perched in a tree just before the Jemseg's bridge.
It was in the same area that Jim Goltz reported this morning. My first
one, finally.

This afternoon (Dec. 9, 2013) Peter Pearce, Ronnie Phillips and I went
to Jemseg in search of a SNOWY OWL reported earlier today. We proceeded
along Route 105 (old TCH) all the way to Jemseg without success. We then got on Route 2 (new TCH) and headed back toward Fredericton
whereupon we found a Snowy Owl perched atop a tree very near where Jim Goltz reported seeing one this morning. When we reached Route 105 we drove back toward Jemseg and Ronnie spotted a Snowy Owl high in a tree on the bank of the St. John River. We were able to get great looks at it and we felt it looked slightly different from the other one sighted. Since we were only about 700-800 metres away we assumed it must be the same owl. Once again we got on Route 2 and headed toward Fredericton.
Read more »
Posted by Archive Manager at 10:00 PM 0 comments

From: Owen House
Subject: sandpipers from Joyce
Thought you might enjoy a brief sojurn on the beach looking at least sandpipers.  Joyce

Posted by Archive Manager at 9:26 AM 1 comments 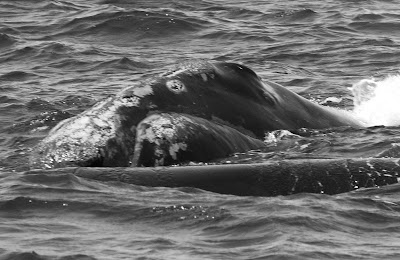 Catspaw has a new calf this season. We only see Catspaw in the Bay of Fundy when she has a calf, the same as Wart who also never comes to the Bay unless she has a calf, so we look forward to seeing both of them this summer in the Bay.

Read more »
Posted by Archive Manager at 7:18 AM 0 comments

A neglected marshy area on Campobello was filled with a dozen palm warblers and half a dozen yellow-rumped warblers today. They were flycatching near the surface of the water and in the air. They were very busy. I took a lot of photos and liked the contrast of the pale stumps and limbs and the bright birds.

Posted by Archive Manager at 7:08 AM 0 comments 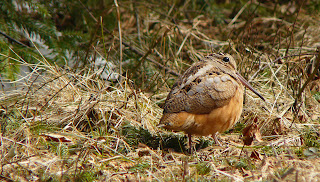 http://casa-del-campo.smugmug.com/Birds/woodcock/28600764_j4v23G#!p=1&n=10
Woodcock have arrived.  They are along the edges of the wooded roads where the sun has melted the snow. Spring is certainly here!  Joyce

Posted by Archive Manager at 9:36 AM 0 comments