Native Americans - Visit Maine and Learn about the Wabanaki Culture

Centuries before English, French, Dutch, Portuguese and perhaps Norse explorers claimed to discover Maine, Native Americans called it home. Collectively known as the Wabanaki, or People of the Dawn, Maine’s Native Americans are divided into four tribes: The Micmacs and Maliseets, based in Aroostook County; the Penobscots, on Indian Island, near Orono; and the Passamaquoddy, based at Pleasant Point, in Perry, near Eastport, and at Indian Township, in Princeton, near Calais.Learn more about Maine's Native American history at museums and get to know current members of this community by attending fairs and festivals.

You can see Wabanaki collections at several museums. The strongest collections are at the Abbe Museum on Mount Desert Island, the Hudson Museum at the University of Maine at Orono, the Maine State Museum in Augusta, and the Penobscot Nation Museum on Indian Island. Smaller collections of note are at the Waponahki Museum & Resource Center in Pleasant Point, Nowetah's Indian Museum and Gift Store in New Portland, the Passamaquoddy Museum at Indian Township, and at local historical society museums throughout the state.

You'll also find many children's activities at the Abbe and Hudson museums. The Abbe Museum's gift shop, open year-round, has a well-chosen selection of Native American-made crafts as well as books and related merchandise.

The Wabanaki are renowned for crafts including baskets, birch-bark canoes, walking sticks and beaded jewelry. You can see baskets made by members of the Maine Indian Basketmakers Alliance at three annual events: the Native American Festival and Basketmakers Market in July in Bar Harbor; the Common Ground Country Fair in September in Unity; and the Maine Indian Basketmakers Sale and Demonstration in December at the University of Maine at Orono. These events also highlight traditional Native American singing, drumming and storytelling.

FISHERIES: Just how much have things changed you ask! |

Some of us remember the Quoddy Region as a bustling centre of activity fed by the abundant fisheries of the area. In only a few decades this has changed dramatically as shown by this report from Fishing Grounds of the Gulf of Maine by Walter H. Rich which first appeared in the U.S. Department of Commerce, Bureau of Fisheries, Report of the United States Commissioner of Fisheries, for the fiscal year 1929
**************************
The Wolves. These make a group of small islands lying N. ½ E. from Grand Manan, distant 8 or 10 miles. On the bottom of rocks and gravel, extending about a mile from the shores of these, in depths of from 18 to 34 fathoms, small boats and small vessels take a quantity of fish by trawl and hand line. These are mainly haddock and cod grounds in May and June and pollock grounds in June and July. It is also a winter lobster ground for Canadian fishermen.
The Wolves Bank. This bank lies between The Wolves and Grand Manan, distant about 8 miles from East Quoddy Light, SE. ½ E. Marks: The Coxcomb showing to the eastward and just touching on the western edge of Green Island: bring the heads of Grand Manan to form The Armchair, and White Horse and Simpson Island into range. This is a small-boat ground of scarcely more than 6 acres, with depths of 18 to 30 fathoms on a bottom of rocks and mud. Species and seasons are as on The Wolves. Southeast from The Wolves from 2 to 20 miles lies a piece of muddy bottom where hake are usually abundant in summer.
Campobello and vicinity. Fair quantities of haddock and cod are found between Grand Manan and the American shore in the North Channel (Grand Manan Channel) between West Quoddy Head and Grand Manan in depths of from 40 to 50 fathoms, over a bottom of rocks, mud, and sand in June, July, and August and up to September 15, while hake is the most abundant species present.
No haddock or cod are on these grounds in winter. Halibut are taken in similar numbers in the North Channel in May, June, and July. Pollock are taken on the western side of Campobello Island, near the eastern side of Indian Island, and at the mouth of the channel between Campobello and Casco Bay Island. In all these places are strong tidal eddies. Some fish are taken by seining, but most are caught by hook and line in a small-boat fishery lasting from June 1 to September 1. All around Campobello and Deer Island and on the New Brunswick shore as far as St. John are located weirs, which furnish large quantities of herring to the factories at Eastport and Lubec.
Passamaquoddy Bay.   Depths here are from 10 to 24 fathoms, even 30 fathoms where the St. Croix River passes out into the sea. In general the bottom is muddy, although there are rocky patches. In most years a school of cod “strikes” here in April, the early corners being mostly of small size, but the later arrivals may reach 30, 40, or even 60 pounds. Haddock sometimes make their appearance in the bay as early as May 1, remaining through August. Hake, also, are present from June to September, but this excellent fish is held of little account by local fishermen. A considerable flounder industry is developing in these waters, the fish being taken in specially devised traps as well as by the smaller otter trawls.
Passamaquoddy Bay is also a spring netting ground for herring (food fish), and there are also many weirs in operation here each year whose catch goes to the factories of Eastport and Lubec for canning as sardines. Pollock are very abundant, and a great deal of fishing for them is carried on from June to October, both by seine and hand line. At times the pollock completely fill the many herring weirs, until, from their numbers, there is no market for them. Pollock are also abundant at the same season and are taken by the same methods in the St. Croix River, though  perhaps they leave the river a month earlier in the fall.
The Mud Hake Grounds. These grounds extend about N. and S. between Campobello and The Wolves and from about West Quoddy Head to Grand Manan. Their length is about 15 to 18 miles and their width 3½ miles. This is a summer ground much used by Canadian fishermen out of Campobello, Grand Manan, and Beaver Harbor. It is said to be the best hake grounds in this vicinity.
Posted by Archive Manager at 10:38 AM 0 comments 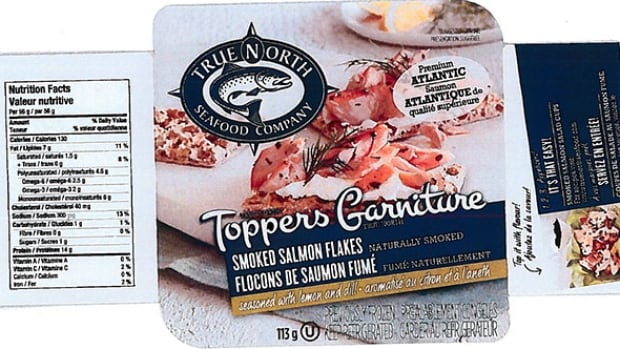 The recall applies to the 113-gram package of Toppers Smoked Salmon Flakes seasoned with lemon and dill that have a product code of 7838 and best before dates up to and including Nov. 17, 2017. (Canadian Food Inspection Agency)

The Canadian Food Inspection Agency says the product is available in New Brunswick, Nova Scotia and Ontario, but may be available nationally.

The recall was triggered by agency test results.

There haven't been any illnesses associated with consuming the product.

According to the agency, symptoms of food contaminated with Listeria "can include vomiting, nausea, persistent fever, muscle aches, severe headache and neck stiffness. Pregnant women, the elderly and people with weakened immune systems are particularly at risk," it says in a posting on its website.

"Although infected pregnant women may experience only mild, flu-like symptoms, the infection can lead to premature delivery, infection of the newborn or even stillbirth. In severe cases of illness, people may die."
Posted by Archive Manager at 7:27 PM 0 comments

OCTOBER 15, 2017  BY DANIELLE DION
Hello everyone, Danielle here with Quoddy Link Marine!  We continue to have some great whale sightings but with any whale watching in the fall we need the weather.  There have been a few departures we have cancelled due to high winds.  But, when the weather allows and we are able to venture out offshore towards the Wolves Bank, the Owen Basin and the Grand Manan Channel we have found both humpbacks and/or fin whales on every trip!
Here are some great images from the past 10 days
Posted by Archive Manager at 10:05 AM 0 comments

Where to Eat, Where to Stay, Where to Shop and Where to Play in St. Stephen, New Brunswick and Calais, Maine